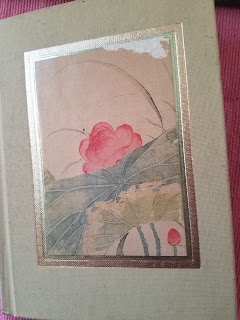 This journal was a gift. Not my usual style, but I ended up bringing it to training and conferences that fueled my budding activism. during the anti-war movement was escalating in the mid-80s. Regan in office, nuclear weapons escalating,  and U.S. military action in El Salvador, Nicaragua, and who knows where else.
The note is partially filled with notes of legalities of select-service,  conscientious objection, small tidbits of locations for rallies and the meetings after the rallies, notes, and phone numbers. So instead of being up location for all these “peaceful thoughts”, it ended up being an organizing notebook.
Signs I saw in DC
No more genocide in my name.
It’s 1983. Do you know where your country is?
Reagan thinks justice is “just us”.
Up your arsenal, Pentagon.

I also included a short tidbit about a direct action I took at the ROTC military ball in April 1983. I noted the date, which made it a lot easier to reach out to the reference librarian at my alma mater and ask her to send me some images of the day. 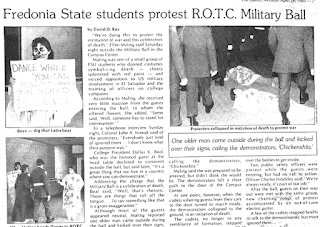 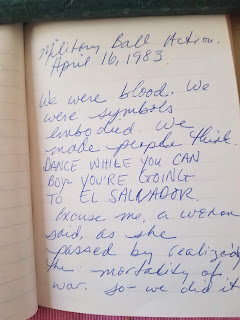