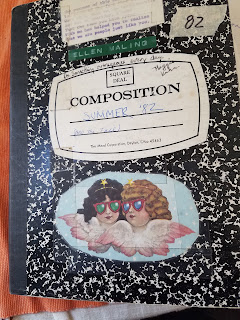 In this journal, I wrote about the disjointed unity of the June 12th rally for nuclear disarmament in 1982. Nearly a million people gathered in Central Park that day.
That sentiment was reinforced by this blog post, which recognized the power of the gathering; the author calls out the intersectionality of poverty,  war toys, Latin American foreign policy, and racism. 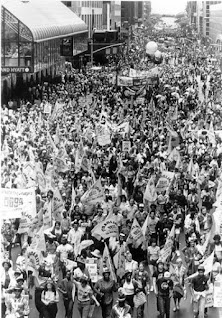 Life went on. I wrote about a friend's elderly Siamese cat who bit my bit me right on the nose when I was petting her. After taking the cat to the vet, I expressed concerns to her owner. I could tell the cat was dying and yet the vet was doing marginal “vitamin treatments”, which didn’t appear helpful.
I lived in a group house with a number of other students close to campus. I shared a room with a difficult personality, who once watched me create a pile of cooked cookies, delighting in the fact that I didn’t know to put them on a rack to cool. We had other conflicts in our shared room and I sensed her seething anger about what I thought was a stealthy simulation habit I pursued to relax. Truly, I thought she was already asleep herself. Little did I know she was a light sleeper.
I came home from college when my grandmother died. I remember being in her room as she passed and the profound regret of not learning more about her life when she was alive. That’s a topic for another post…
A professor inspiration to look to dogs for stress management because they were rested and relaxed until the moment they were triggered into action. I’d tucked a mimeographed “How to tell if you are a stress-prone personality” quiz into the journal. My score was off the charts. Dr. Rosalind Forbes’ adapted quiz is here. 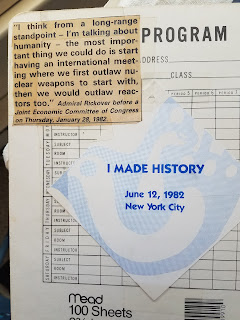 I think I was taking a creative writing class and had a lot of angst about not having any ideas for stories. I was surrounded by creative people, yet felt completely disabled in forming worlds in my own mind. Again writing about all the internal machinations, not directing it into the creation of new work.
Falling in with the lesbian posse, I found a group to belong to and it was only a question of time before relationships became intimate. In my “practice letters”,  I referred to one lover as a perfect pine cone, then became increasingly disenchanted as she burned dinner while she was passed out from drinking.  I was getting feedback from the others that this wasn’t a good idea, but I couldn't let go for a while. My friends were chagrined, as I think they knew that she had been double-timing me.  I remember I wrote about being very excited to be alone again. That's where I felt comfortable
The journal ends with moving in with G. We shook on the deal not to sleep with each other when we lived together.  Weeks later, there were continued overtures.  Our house was way out of town, cheap and cold.  We moved in on January 1st, 1983. The son of the recently passed mother lived downstairs. He showed me how to use a microwave, a novel technology at the time. A young Welsh woman on work-study stayed with us for a semester which forced the issue of sharing a bed. On a beautiful spring day, I begged off staying in bed and instead went out to the gardens that were alongside the house and cleared off old leaves. The bulbs were emerging, as they do.  The elderly neighbors next door were excited. neighbors were so excited. They brought me in for a cup of tea, the calendar on the wall reflecting the local feed store, and crocheted dishcloths the likes of which I hadn’t seen before.
In hindsight, I don't remember what the blossoms looked like from the garden.  I remember a horrific lung infection and coughing. G made an onion poultice for my chest, continuing to push for a relationship when really I wanted to be left alone. 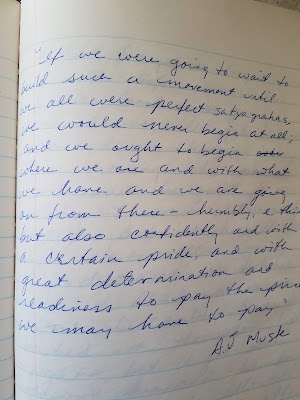 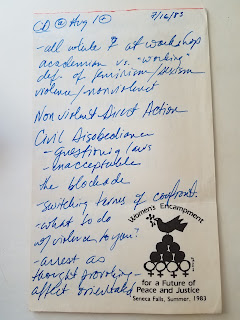