~This is the third chapter of my year-long exploration of

Not unsurprising for northern climes, midcoast Maine had a snowstorm in early April during which there was a palpable sense of discouragement in the air. After the sunny and temperate weather the week before, people around me expressed disappointment and resignation. It has been a quite cold and wet spring. Rivers are flooding, plants are still barely emerging, and we are all longing for sunny weather and the heat of summer.

On the same spring snow day, I had unexpected news myself. I’d refilled my prescription for Levemir, long-acting insulin of which I take by injection twice daily. The text message confirmed the cost was $317 for one month's supply. I was perplexed. After a phone call to Harvard Pilgrim Health Care, I learned that my insurance deductible increased from $750 to $4,500 a year.

With a welcome surge in my business, my income tipped over $40,000 a year in adjusted gross income in 2018. That meant I lost the low-income subsidy that I’d enjoyed since I returned from Cambodia in 2016. That’s okay. I’d rather be working.

I settled up the tax bill with the Feds and reported the change to Healthcare.gov.  Now, in addition to doubling my premium to $1,000 a month, the deductible went up to 600%. High-deductible plans are a killer, literally. Just last week NPR ran a story about potential delays in diagnosis and access to medication that often resulted from high deductible plans. People in the middle-class often don’t qualify for rebates, patient assistance programs or other workarounds that exist as either a corporate marketing ploy or a charitable entity. With a dependence on expensive medication to survive, diabetics are particularly vulnerable.

Canadian scientists Banting, Collip, and Best, who discovered insulin, sold the patent in 1921 to the University of Toronto for $1 each. They believed that no profit should be derived from it. In my childhood, insulin was harvested from cows and pigs. Eli Lilly developed the first use of recombinant DNA technology to produce synthetic insulin (Humulin) in 1982. These high-tech medications are specifically formulated for different levels of duration and use. Generally, they work better for diabetics and have addressed the ever-expanding market needs generated by the increase in the number of Type 1 and Type 2 diabetics using insulin. However, the price point hurts. 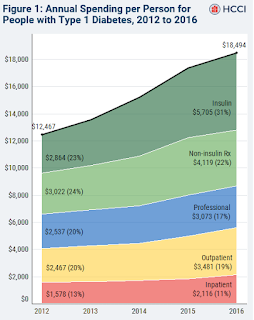 The rising costs of insulin have generated controversy, especially in recent months. Finally, the American Diabetes Association testified to Congress about the costs of insulin in May 2018. The Attorney General filed a lawsuit accusing drug manufacturers Sanofi SA, Novo Nordisk, and Eli Lilly and Co of deceptively raising prices. In January,  the Health Care Cost Institute released a report that demonstrated, based on an analysis of healthcare claims, that insulin costs have effectively doubled since 2012.

There’s nothing quite like being sent a message that someone else’s profit motive is more important than your ability to navigate the financial realities of staying alive. That is not the case for me, but after 50 years my need for insulin is ingrained in my subconscious. In my guiding days as I prepared for multi-week trips in the Arctic National Wildlife Refuge, I would rise from the deep sleep nightmarish scenario with a terrifying realization I’d left my med kit at home (usually on the plane or the shuttle bus out to the wilderness.)  To mitigate the worry, I would pack and checklist the heck out of the supplies.

About an hour north of my home a  few months ago, on a work trip, I realized at lunchtime that I’d misjudged the amount of insulin left in my plastic pen delivery device. Due in part to being to me being distracted and a profit-driven design flaw from Eli Lilly, 8 remaining units (2 meal doses) in the pen were locked behind the rubber tip. I could have skipped lunch entirely, but instead took a break to head off to the pharmacy. The understanding pharmacist gave me a syringe and was nonchalant about my gratitude. Now, I carry one in the med kit, just in case.

The tension around accessing our exorbitant elixir, albeit mild in my case, creates just another stressor for the people like me who depend on life-saving medication. I could tell you about the number of campaigns on GoFundMe with insulin in the title (6,567) or that it’s reported that 1 in 4 diabetics are rationing insulin because of the cost, or by 2030 its projected that that half of the people who will need insulin (the market is growing in Africa and Asia) will not be able to afford it. I know my story is repeated in thousands of ways and across the U.S. and in developing countries.  In Cambodia, I could purchase insulin from a well-regarded pharmacy for about $30 a bottle. But there were poor people who couldn’t afford that. This situation feels like the rainy, cold weather we continue to have as April has come to close. The tree buds are closed up tight, holding their energy in until there is a promise of a warmer stretch.

However, I found my crocus. By pure happenstance, I found a secret, underground market for insulin. PK, who died at 63, had a family that cared enough to find a clearinghouse. The unused, unexpired and unopened vials and pens of insulin are collected by someone who finds the people that need it. I was able to procure a few months supply for a modest donation. If you read this and need help with insulin costs, let’s talk.