It was a "last-chance before the snow falls" pilgrimage back to a beloved land, culture, and people. The primary mission to see old friends and bring back my belongings. In the final hour of the 9 hours of flights from Maine. I lifted the window, high-fived my forethought and appreciated the clear skies as the sun stretched its legs in the waning autumn evening. 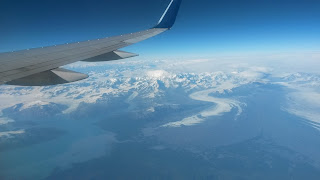 The Lost Coast of Alaska,  the northern coastline of the longest contiguous stretch of wilderness in the world,was studded by glaciers and mountains below.  I'd guided many trips in two glacier-filled bays along this coast in the mid-90s. It was a sheer, raw,dynamic  and powerful place where I felt such a deep hue of humility and awe that I felt some of my ashes should be spread there after my final days. The plane flew farther north to Valdez, then over the mountains and following the highway into Anchorage.

Over the next ten days, I awoke during a mild earthquake at 3am, saw moose and calves in Anchorage's parks, watched for belugas amid the glittery outgoing tide of Turnagain Arm, walked long and hard, reunited with some objects some of which were reassuring and others pointless, went to a pop-up street art festival, drove a manual transmission, and listened to my favorite radio station.  My host and Southeast Asia travel companion fulfilled my hope and offered to drive on a road trip out to the edge of the biggest National Park in the US, which is only accessible by air or a 60-mile gravel road.

The highway stretched through expanses of golden birch and aspen punctuated by distant views of some of the highest mountains in North America. I reunited with a friend and homesteader, who I hosted for a few winters at my house in Spenard, and moved into a sweet little cabin for the weekend.  We drove into town with Mark on Friday night for some local culture and aurora's magic glowing green waves rippled in the sky.

One our way into town the next day, heading up to the Kennecott mine for our hike, the memories of my first autumn in Alaska drifted in.  I'd gone out alone in my 1984 Landcruiser wagon for an end of season trip to visit my friend Tim. I'd just started a new job coordinating an eco-tourism trade association in Valdez. On the long gravel road that was the old railroad bed, I'd gotten a flat tire and changed it myself. My friend was guiding trips and the operations were based out of a shipping container in the gravel beds on the riverside. The airstrip was on the other side of the river in the old miner's community.  Ar the time, the only way across the rushing and icy glacial river was to pull yourself over on a hand-tram that swayed above a rocky, rushing, glacier-fueled river. Tim and his fellow guides shuttled their gear across each day  I watched the owner heat his bathing water with a small, twiggy fire in a tiny, cylindrical stove.

Years later, on this crisp fall morning, we set out and hiked up-- 1,000 feet of elevation per mile--saw bears grazing on the hillside, more mountains stretching on forever,  and returned home to make a simple dinner and sleep well.

There were other nights in cabins in this beautiful valley. In the late days of 2008, I was the beginning of a new stage of work and feeling frayed by the previous job. I rode in with a couple of with a couple of gal friends who also had cabins in the area. The truck was loaded with tire chains and a chainsaw, There was a cold snap of well below zero degrees.  My homesteader friend met me at the trailhead at the road and I was happy to ski with my backpack. I was staying in the cabin couple that rented a room in my house during a winter they lived in this special foothills area of Fireweed mountain a few years earlier.

The outgoing breath billowed to leave frost on my eyelashes and breathing in froze nose hairs.  Over the next few days, I explored the area with Mark, read and wrote, and split wood in the noon light. The big spruce logs cracked apart in the deep still cold. I hauled in and restocked and melted snow for water. That night, drifting down to 30 below, the night percolated along nicely. It was time to buff up the stove before bed.

The gnarled piece was problematic to split even in the deep cold of the Alaskan interior. A knot entangled at the base. It barely fit in the barrel of the stove. Hot and fierce action erupted as the heady flow of oxygen was sucked in. The accelerator was floored in this race to complete destruction.  The stovepipe glowed red.  If this went bad it would be a disparaged legacy, a reputation gone awry, a horrible act of negligence and a grievance that one lifetime couldn't heal. Perhaps only a minute passed in frantic poking and prodding, but then the load shifted. The stove door shut and I exhaled and tempered the damper. Everything was settled into a slow burn.  I was happy to see the morning.

Now back in Maine, the fatigue of the redeye flight has subsided. The fiery passion of getting set up in Maine has now settled into a merry warmth on a bed of settled coals. The fire embers I spoke of back in 2011 are igniting. The 9 boxes of books, journals, antique kitchen tools, and small arty objects of importance and joy will arrive before September's end.

While I will likely never work as a guide again,  I now have the outdoor gear I need to explore Maine's vast wild places. On the departure evening at the airport,  I hefted the utilitarian duffle bag from my guiding days onto the scale. I'd carefully packed with my outdoor gear: tent, life jacket, sleeping bag, hiking boots, small tarp anI stove. It weighed in at 49.5 pounds, 8 ounces shy of the overweight limit. "Nicely done.", the Alaska Airlines agent commented as it moved away on the conveyer belt. "Yes!", my brain high-fived itself, "Haven't lost the mojo."