These Are My People

It was magic hour on the beach.  The sun setting low and casting a long heeled aura of golden hue over the out-wash of the waves in the sand, the sky and the people. My sister Barb, nephew Ian and I were settled in lawn chairs, watching the scene and waiting for o-dark thirty and the annual fireworks show to begin. 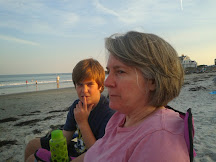 Adolescents milled about,chattering about the double dare to dip in the brisk Atlantic ocean before the sun set.  Young children polished their sand castles. Parents joked and chatted.  It was small town America and the national holiday, of celebrations and place, of peace and prosperity.  Red white and blue striped bunting hung over the high streaming alpenglow-touched clouds.

Growing up in Poughkeepsie, New York---the suburbs of which were a company town of IBM--the fourth of July was a drive to a large field overlooking the Hudson River.  The massive crowds forced our family to stick together on the reclaimed golf course, hanging in the waiting for the show. There were long lines of taillights to follow on the way home.  Later in life, while visiting a friend whose husband was playing a gig, I attended a swank party at an estate overlooking the same Hudson River.  Luanne and I sipped a cocktail and smiled when the the bass guitarist played a ripping version of the Star-Spangled Banner in the moment the first rocket went to mid-air.

The music was different one morning in Alaska on July 4th, 1996   I stood in the kitchen of a campsite along Russel Fjord, making breakfast for the group I was leading.  Below me, the outgoing tide and hundreds of berglets from the Hubbard Glacier created a parade.  Immense in the power of all forms: the strong tidal current icy cold water from the Gulf of Alaska, the jostling, jamming and tumbling of the bergs and the raw elemental power of it all mingled with the rich aroma of the final stages of a frittata.

I’ve been back from my crazy leave-taking of Alaska for over a month and reflecting on the aspects of home and community. I am without mortgage and using a rented physical address.   My belongings are stacked in plastic crates and duffel bags.  I still define myself as Alaskan, where I lived for over 20 years, but now I  have shifted to “snowbird” status.  My roots are shallow.  Currently I have no investment in building soil for my own garden, just focused on pots with plants.

This is not entirely uncomfortable; I have always been my happiest moving around.
But nothing replaces the feelings that arise when you see friends of a long time and that shared history.   Or when you connect back not only with a physical place-- but with the spirit of who you were in the past and how far it has been since.   The space of a land, people and the moment in time that mixes into a special, irreplaceable gem of memory, thought and sensation: home.

The trip back to Alaska was an upwelling, a deep clear basin filled  by deep source water seeping toward the light. The experiences built my character, cemented friendships, pushed boundaries and formed irreplaceable networks and directions for relationships, careers and connection to the land.  And it all began with a copy of Alaska magazine.

I’d gotten a wild hair to said to myself after my second season as a river guide on the Rio Grande in Big Bend National Park, “If I am going to be a wilderness guide, then I need to be in Alaska.” After a series of letters to advertisers in Alaska magazine, I got an invitation to apply.   Instead of writing the staid response to the “Introduce yourself” question, I went on a creative limb and structured the piece as a TV talk show interview.   I got the job.

Months later, I was battling with the US Coast Guard and won- becoming the first diabetic in Alaska to receive at US Coast Guard commercial boating 6-pack license to traverse the notoriously unpredictable Skilak Lake.  I was on the fast-track of learning Alaskan ecosystems and surrounded by a group of like-minded peers all giddy with the endless sun and frenetic pace of summer.  Across the lake, the ridges of Knuckle Mountain punctuated the skyline. The only way up was a steep, rugged trail that popped up into glorious tundra and vistas of the lake.

As I was contemplating what to do on my Alaska trip, the place returned to me.  An inquiry and luck resulted in an invitation and a chance to revisit.   On that same place of expansive tundra in 1992, I'd had a  chance encounter with one of Kenai Peninsula’s caribou. In that moment, I made a promise to myself and the caribou that I would go to the Arctic.   On my last river trip in the Arctic National Wildlife Refuge in 2008, I’d promised myself that I would go to Africa.  In Tanzania, the network opened up for development work in SE Asia.   Now, supine in the nostalgic aroma of laborador tea and wistful memories, I could only face the vistas and wonder what was next.

In the evening walk last week, the rumble of thunder was not unlike the rolls that punctuated many a childhood night in the Hudson River valley, where  legends of bowling old men and Rip Van Winkle's very long sleep were a part of the local yore.  The weather and chance urban wildlife encounters I experience here are,  in the aftermath of a torrential rain, the glimpse of a rat that makes a frantic, desperate swim across the flood in the street to scramble to the high ground of sidewalk and generating shrieks from shopkeepers.

This stage-- a determined yet still far off departure in sight-- is one of testing and exploring, researching and collecting ideas.  A waystation, as it is for so many expats here, that results in one of the first questions that comes up in introductory conversations, "How long are you planning to be here?"

I'm mulling over if my next house will have wheels or just be a plot of land, or maybe a few plots of land in different places or maybe no house at all. I'm forming goals, plans and inquiring on ideas.  I have a keen idea of what community I want, but the place is still an wispy fog on the horizon.

However, on one of the many flights over the wild,unfettered wilderness of the Gulf Coast in the mid-90's, the expanse of wilderness between Yakutat and Cordova spoke to me in such a very touched me so deeply.  As one is want to do when flying over vast spaces in a airplane cockpit smaller than a Volkswagon bug and considering the scenarios, at that moment I felt that I wanted some of my ashes dropped from the door of a low-flying Cessna.  Alighted and scattered amid wild places. Home.