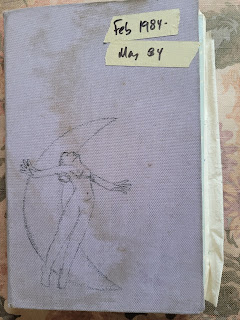 As we open, I’m back in Fredonia, sorting things out with G. The journal proceeds with the ruminations and doubts about why I couldn’t pick up and start my own life without her. Questioning myself, the unknowing why of who I was, and the bond that transcended fights, passion, and disagreement. There were nights she was late, arriving with excuses.

I wrote, “continually, I am disgruntled that my diabetes prevents me from achieving everything I’d like to do, like the Peace Corps or going to an impoverished country and helping the poor.” And a resolution to start “dating my journal,” which only meant I added the dates to mark the passage of time

I remember being very disappointed that G made no effort meeting my parents, noting how unattractive and sullen she appeared at my graduation ceremony.  We made plans with a group of us to move to Boston after my application for an internship in Japan was denied. I worked on my submission for the Peace Ribbon project.  Apparently, I worked as a crew chief for the Chautauqua Private Industry Council that summer, which I didn't remember until I found the business card.

Through the summer, I read:

The Writer on Her Work, ed. Janet Stanberg

Bury My Heart At Wounded Knee

In the end, I told G that I was infatuated with a graphic designer who helped me design a canvas for an embroidered pentacle project, which ended it. She had no interest in continuing intimacy, and while nothing ever came of the crush with the recipient, it was the feeling I needed to change the dynamic. I found solace in a local reservoir where the water rippled in the shade of pines. I got a tattoo, a yin/yang symbol that I copied from the Tassajara Bread Book.  Through all the travails, I began to get very excited about moving to Boston, having a support system in place but free to pursue my path. 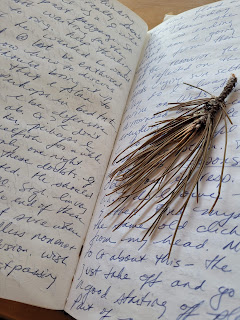