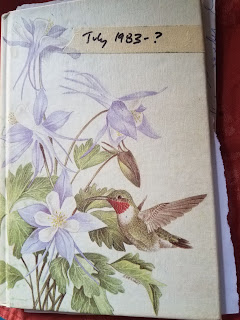 This journal begins on the last day of my summer internship at the New York State Archives, where my main project was to rebox files from SingSing prison from the old to the new acid-free archival boxes. As I would review the contents, I would heft the larger files from the box to see how they began. Inevitably, juvenile petty shenanigans (at 8-13 years) escalated into larger and more serious crimes.  I looked at Julius and Ethel Rosenberg's telegrams received before they were executed and marveled over a handmade weapon resembling a circular saw.  In the end, I let without anyone saying goodbye; I was not supervised well.

However,  I did a great job on a paper I had to write for the college credit, which explored the nuances of how the dehumanizing elements of the prison system perpetuated the trauma instead of being rehabilitative. I explored the Friends Alternatives to Violence Project and read prison notes from people who were published. I remember leaving my notes in a folder on the grass, losing the details yet being able to reconstruct enough to create an acceptable final product.

I spent time at the women’s peace encampment in Romulus, New York, and was fascinated by the culture, bravery, and long, drawn-out discussions about nonviolent action. I also learned you could put a wooden platform beneath a tent and have a bed and dresser inside. I think I went back to Joslin clinic for more education. I remember traveling from Boston to Buffalo on a plane, writing about low blood sugar tears from a missed flight and the saffron-robed Hare Krishnas.

In the end, as I returned to school, my love interest at the time had found a new apartment and a new lover. My writing is fueled by betrayal, anger, hanging on, and the complicated approach of staying within a relationship because “monogamy is misogyny.”

I ended with an observation, “I feel like I’m losing my leaves becoming bare, shedding a part of my life which has changed colors, dried out, and shall pass into a different stage.”