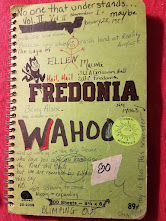 This journal begins with Halloween reflections of a party where I went in costume, drank too much, and ended up coming home without very specific memories of what happened, except for a discussion with a Sheik in an Arco suit.

I wrote a letter to the teacher of a drawing class. I thought it would be fun to try art and see what would happen. Shortly after buying all the expensive supplies, I realized I was completely and totally out of my league. I'd gotten a C- on my poetry paper the previous day. The professor said, "look at what you did wrong" and laughed. I felt humiliated, inconsequential, and a bother from the others who were more worthy.  I knew I wasn't as good as the other students, who were likely taking the required course for the rest of their art degrees.

I wrote of my volunteer work with the Help Service, a phone hotline open to the community, and made new friends. Now, I remember that we often killed time by flipping pencils into the ceiling tiles.  As the Thanksgiving holidays approached, I began to write more of my connections to the friends back home.
We were a rambunctious bunch, heady in the days of ample access to marijuana, alcohol, and other drugs. There was a group of boys that I would meet at the train tracks down by the Hudson River. We would meet for beer, bonfires, guitars, and bad singing. Often, I was the only female. There was a fellow that was particularly sweet on me and I still have the beautiful wooden lap desk box he made for me. The group dynamics got complicated after I left for college (poor decisions when I returned home on breaks), and one particularly hilarious moment of car-necking when my knee hit a button on the radio and a radio host proclaimed, "Jesus died for your sins" and both of us collapsed into laugher.
The journal ends with narrating a near-miss accident with my family on a dark winter highway on the way home from Maine.  A car in front of us skidded on the ice, around and around, and crashed into the guard rail in front of us. As I contemplated the eventuality of death, I wrote a letter to my friends to be read at my funeral.

"All I ask of you is ~when the summer nights are clear and the fire glows anew with another log~ that you sing those songs louder for me.  Friendship has always been a very important to me. The solace of your voices drifting up into the night with the flames will tell me that you think of me and the past times, however good or bad. I've always thought that one could anything when another human loves you.  When I'm gone, all I ask is that you smile and remember that you always crash land at reality airport. The river spirit flows on."

And, in the final pages of the notebook dated early 1981, grumbling about my college roommate, I wrote, "I think I'll be a plant always looking for a pot, transplanted from home, adjustment periods, growing by still lacking real root space."