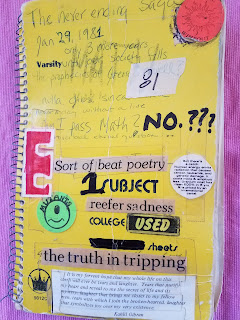 Beginning in the second semester of my freshman year, I begin to hit my stride. I'm getting great feedback from professors, classes are resonating, and I'm feeling the groove on the college experience.

Conflicts persist with my freshman roommate, Barbara, who irons for relaxation. Pressing underwear and t-shirts fills her time when she isn't occupied with her boyfriend. She confesses to me that she'll never be without a man. Then, she kicks me out of the dorm room when she needed private time with the current one.

The journal contains a few notes written on the eve of my sister's birthday, sharing my story of the time I let go of my younger brother while we were twirling around in anticipation of her party.  The story begins with me at the core, spinning my brother around with outstretched arms, our laugher as his feet leave the floor.  Energy abounds.

The doorbell rang, and for a second my attention drifted, then I released him into a very large ground floor window. I hear the breaking glass, the screams of his 5-year-old self, his head hanging there. The shards cut my fingers as I got him loose.  B yells at me for ruining everything, and mom is calling the emergency room, and then reaching all of the parents of the invitees telling them not to come. I'm given a cold washcloth and told to press it to his forehead. Blood drips on the floor the drops extending like sun rays.  After my mom drives to the emergency room, I stand in the driveway to tell all the mothers that the party is off.  16 stitches, a Frankenstein-like scar on his forehead, and me still carrying this with me, still, 50 years later.

I wrote of other traumas of the past and even those that occurred in the months of this journal. These, I am not ready to share here.  I saved the pages, however, to sit with at a later time.