~This is the fourth chapter of my year-long exploration of
living with type 1 diabetes for 50 years.~

After three years of moving-related transitions, I finally have my own apartment and initiated the process of unpacking and creating my nest. There’s art on the walls: funky stuff from my freelance river chick vagabond days, small things from Alaska, gifts from Cambodia, and pieces that I’ve inherited.  I finally found my Qiviut smoke ring ~a gift from a friend that I thought had gone missing~ and continue to wonder why I moved a set of ceramic mixing bowls, the largest of broke in transit. I’m evaluating furniture purchase (anything that folds up is a score) and considering the elements of design in a small space.


With all my belongings in one place for the first time since I sold my house in July 2014, I am "buffing out" a few items that I need for daily life. Flatware, water kettle, and kitchen linens have been acquired. People told me that I needed to attend the Midcoast Hospital Auxilliary “Grand and Glorious Yard Sale” event, at three large empty spaces in a struggling mall.

The only window to attend the “pre-opening” on Friday evening and thus I paid the $25 admission fee. Remnants of lives and stuff no longer needed was piled everywhere: knick-knacks, garage & garden, furniture, antiques. Hordes of people grabbed items to put into their bags. Creepy wooden carvings and piles of plastic crap scattered through stacks of picture frames and old cooking utensils. As I focused on looking for things on my list, I overheard more than one person say, “I don’t need this but it’s so [fill in the blank]”. There was no time to hesitate and the desperation bordered on contagious. After securing items that I needed or wanted, I felt bruised by encounters of humanity. This process of homebuilding has forced me to re-evaluate the role of objects in my life.

In happenstance or by Facebook algorithms, I came across an article from the Atlantic about Diabetics using old insulin pumps to engineer an artificial pancreas. The system involves an open-source, algorithm-based app on a smartphone (called Loop), a discontinued insulin pump (with older software), a continuous glucose monitor (CGM) and an invented transmitter device called a “Rileylink”. The inventor’s daughter lives with T1 and is named Riley. 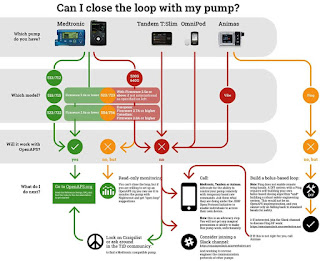 Minutes after finishing the article, I rummaged through a duffle bag to lay hands on the $5,000 pump (purchased in 2007 when I had insurance) and then dived into research. RileyLink ensures that the data from the GCM is transmitting to the app, which then directs the pump to adjust basal insulin levels and correct the crazy stuff that can happen when life is unpredictable. Diabetics still need to tell the pump to deliver insulin at mealtimes, but the everyday routine of daily tracking particularly for diabetics that experience night-time low blood sugars is eliminated.

It’s revolutionary, experimental technology developed by people who dedicated extraordinary amounts of time and testing to develop Loop. I checked the software on my old pump. It is Loop-compatible, meaning that I could either get the whole system set up and running (involving a number of purchases including an iPhone and lots of disposable supplies) or, I could sell it to someone and change their life.

I’m still on the fence. Moving into Loop would mean more expense, more attachment to devices and tech, and all the things I hated about being on the pump. But it might give me more insights, reduce the worries and diligence of maintaining a healthy A1c, and be a learning curve as I move into this next step.  I'm still thinking about it, searching for cheap folding furniture, and looking forward to the next treasure I unearth from the boxes.