I on a warm morning in May when I liberated my legs of their fuzzy and flaky condition over the long winter. During the ritual, a distinct feeling of unearthing, unpacking, and unfolding emerged. Unlike the new shoots of seeds and the return of familiar perennials, my legs are not fresh; they are mottled by scars. At that moment, I recollected this experience, and so I share it here.
~~~~~~~~~~~~~~~~~~
"Sure, Ellen." Dan said, "You can do it. No problem." Thus, I joined three guys in a truck, with whitewater canoes and kayaks piled atop, as we drove to the remote trailhead on the East Fork of the Matanuska River. The adventure was a culmination of a phase after graduate school when I decided to learn how to paddle a solo canoe in swift water. With a boat, floatation and the variety of artillery that it takes to paddle Alaska's rivers: helmet, drysuit, booties, a paddle, I took lessons. "It's not every 40-year-old woman who decides to learn this stuff for the first time", said one instructor. I had a short window in the spring season to paddle before the hectic elements of my summer-focused job kicked in.

The times when I felt truly confident and balanced in my little canoe were few and far between. The instructors were not the most sensitive sort. One was a homebuilder, who brashly referred to a project as a "lick it and stick it". The only other female in the classes was married to the builder. She hadn't done outdoor stuff before she met him and clarified as she executed a perfect turn, "I had to learn if we wanted to spend time together." I was a pudgy and unsure middle-aged woman, never quite confident enough to truly lean into the groove of my weight and a steady guide of the paddle needed to guide the boat through the current. It required balance, and I always seemed to be off-kilter.

But, as we met early in the morning in the grocery store parking lot, the overconfident leader said it was ok and I believed him. At that moment, I joined an elite squad of bros who drove extraordinary distances and orchestrated complicated shuttles to get time on the water. Hours later, we arrived and unloaded. Amid the men in their nimble squirt kayaks and hearing the sound of water rushing over the rocks in the valley below, I dragged my canoe through the woods to the shore. My small dry bag containing emergency supplies and sundries was clipped to the front thwart of the boat. The sound of the power below fueled an internal dialog raged into a contorted and anxious feeling in my stomach. My beaten canoe, sun-faded after months of ignorance, was my regret for not committing fully to the practice it took to get really good. I wondered how my blood sugar was doing.

Creekside, the water splashed over rocks. It was, as I would have described when I rafted larger rivers, technical. The rest of the boaters go first, happily dancing and bobbing in their little kayaks. Doug waits for me, in another canoe, and I launch. In the first second in the river, I get my angle wrong. The current is faster than I imagined. I am over.

Rivulets of water seep into the cuffs to my dry suit, escalating an limbic response. I clutch my boat and my paddle at the same time as I'm tumbled.  My body bumps up against the rocks: hip. abdomen, arms. On my back with feet downstream, I move to the shore, grabbing for the safety of the plants. I can feel the adrenaline moving through my body as the pain of the bruises are cooled by the frigid mountain water. Doug barks orders, perhaps he's resentful that I went in the drink so quickly. I can see small fish darting about in the eddies of the stream. The water is clean and fresh, unlike the silty, glacial river that I know is downstream. I get back in the boat.

Within a few miles the river opens up into the slower moving current and I move slowly into the zone of dignity and cheeriness, reclaiming my identity as a somewhat competent outdoorswoman. I recognize that now, with a regular job at hand, I am relegated to the weekend warriors and move from the deskbound stiffness to the flow of the river. I started on ibuprofen on the long trip home. Getting dressed before work on Monday, I counted 18 bruises, some large and fierce. They faded, and I survived. These scars define us. 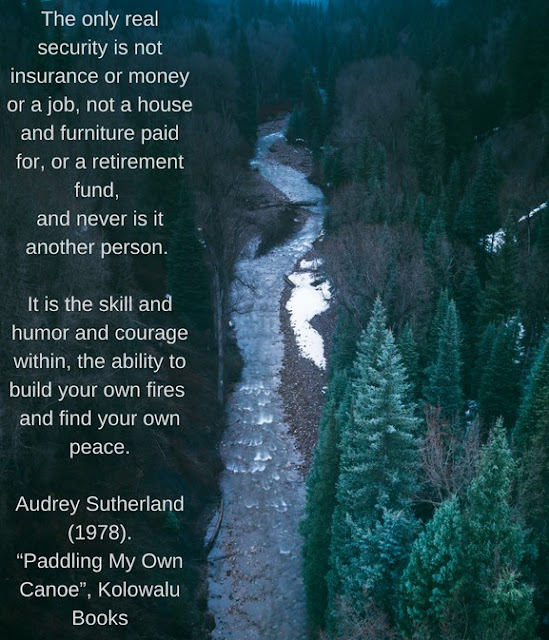