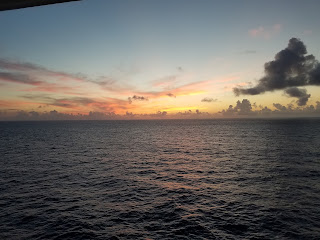 I woke up just as the sun was emerging from the horizon. The ocean was calm after a rocky 24 hours crossing the Gulf Stream on our way to Bermuda. During the day, My sister and I sloshed around, buffeted by high winds and pelting rain, in the hot-tub on the highest deck. The family “Gala Dinner” was marked by sea sickness. I felt germophobic around the overwhelming sense of too many bodies in a small space. On that fresh new morning of a new day, the air on the small veranda was bright and clear.  We were due to navigate 2 rock passage and arrive in Hamilton Harbor mid-day.

That morning reminded me of the early stages of my vagabond life after I left the intense job working on the streets of Boston.  I’d made my way south to Key West and pursued an idea of working as crew on long-haul boats after the taxi-cab and Pedi-cab business became tiresome. Micki, when presented with a willing woman for a job aboard, hired me to work on an overnight sport-fishing charter to the Tortuga Islands about 70 miles offshore with about 75 males. I showed up to the M/V Fishfinder with a small bag. The captain looked me over skeptically. “I can’t believe you brought bananas on a fishing boat.” He said, narrowing his eyes, “It’s bad luck.”


I worked 8 hours on, 8 hours off for two days. I remember dunking my hands in bleach water between bait sets. The effort was rough, dirty and sharp with hooks, knives and a boat that would pitch back in forth amid the fisherman’s expectations. In a gentle moment at dawn when lines were in the water and all were waiting for action, I looked up and out to the horizon.The surface of the sea glowed in lavender velvet, undulating gently. Then, the boat hit a run. I baited hooks and the men gaffed up brilliant red snapper, huge muttons and a Cobia eel that had nearly tied itself around the bait at the end of the hook. Hauled up on the deck, writhing with indignation, the male crew hit the fish on the head until they lay, pristine and peaceful, cold and iridescent, on the deck. At night, the stars swayed in the rocking of the boat, a single vessel in the midst of a large ocean.

I shared my story to a colleague recently:  the escape from the emotionally draining work on the streets of Boston to exploring wild places alone and the risks I took. “How courageous.” she said, “and all by yourself.”  I replied, in hindsight and recollection of that time in my life and the impact on family, “My poor parents.”


The Bermuda trip was a milestone, a reconnection with my mother’s family, a revitalization of my parent’s love of traveling and a marker for moving into a new housing situation that is cheap and close to my folks. Life has settled in and I’ve put down some roots. I now better understand the patterns of perennials and landscapes. I have plenty of work. Local connections are building and solidifying. I have everyday relationships with family.  I am no longer alone.


P.S. The video above was taken by Hartley Helmet Diving, a long-time Bermuda family that pioneered the old school technology that gets you really close to the action. www.hartleybermuda.com
Posted by Ellen Maling at 5:52 AM