Rise of the Jumbotron

The street light on the nearby corner fickered one evening as I was on my way out for a walk.  As I settled into the rthym of the exercise,  I remembered that I used to patrol the streets of my suburban neighborhood as a child. At the age of 8, I studiously noted the numbers of the poles where the streetlamp was burned out and called the city to report in.    In this expat life, I have no idea who to call. If I did, I could easily be dismissed.

Over the past six months,  I've been considering a call to the Ministry of Advertising and Signage to ask them about who decides where to place digital billboards--Jumbotrons-- in the city limits.  I first noticed the impact walking home from the movies one night, a light grey pallor on the night sky. Not the single beam of the spotlight on the heavens, which lights up the sky for big events at casino near the river, but a cool blue haze in the night sky, flickering as a huge television behind a thin curtain in the neighbors window.

The Jumbotron near my friends house shines into her living room every night until 9pm, forcing the purchase of dense window coverings and the loss of their beloved patio for evening reflections and visits.  The luxury apartments under construction next door to her house are slated to have the light facing into the living rooms.  Situations like this make me wonder how the advertiser and the developer reconcile these conflicts- will money be involved?   Do they duke it out in a game of chicken in their luxury SUVs?   Or perhaps if expatriates are renting the apartments, the complaining will become dim background noise in the squander for profits. Easily ignored for a year,  as the lease was signed already.  With a fake smile the landlord will shake his head and say, "There is nothing to be done."

In recent weeks, the Vattanak Building, a distinctive skyscraper in Phnom Penh, installed a jumbotron on the 30th floor.  This building has been heralded as a distintive symbol of  new Cambodian investment, shaped like a dragon's back and incorportaing elements of feng shui and naga motifs (Phnom Penh Post, Dec 2013).   Now, the light from the billboard is visible throughout all areas to the south of the city, a beacon of advertising and an obvious sign of marking territory.  A brilliant spot of urine on the largest tree in town.

The tragedy for me is how the quality of the light pollution changes everything in this small, once quaint city. On the way home from an evening event last week, I passed through the traffic circle around Independence Monument. Nearby to the momument, , the memorial to the King Father stands in a golden glow. The digital advertising sign placed high on a building to the west places created an eerie fog that changed the spirit of the place, casting a toxic hue over history and the brilliantly colored water fountains.

Turning the corner onto the street to my apartment that same evening, I see a young man riding a moto alone. The street is relatively empty.  He bends his head down to look at something in his lap.  I assume that he's checking his phone.  As my tuk tuk overtakes him, I realize he is looking down on his daughter, held in one arm on their way home.  I'm reassured that human connection is present, an antidote to our love affairs with screens. 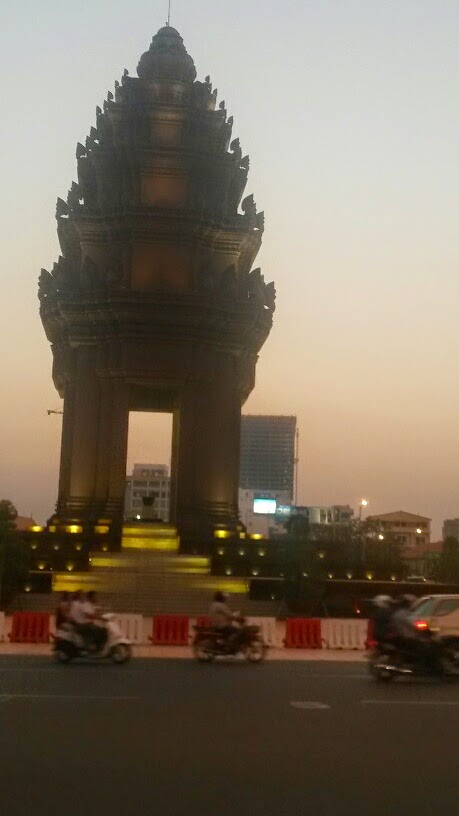