In the end, the toaster stayed along for the ride.  In the mere 9 days I was in Anchorage, I managed to clean out my storage closet, re-gift a lot of belongings and hone my possessions down to a two duffel bags (camping gear), four Rubbermaid tubs and a few boxes.  All of this was conducted with a honed project plan punctuated by welling bouts of both stress and sadness. 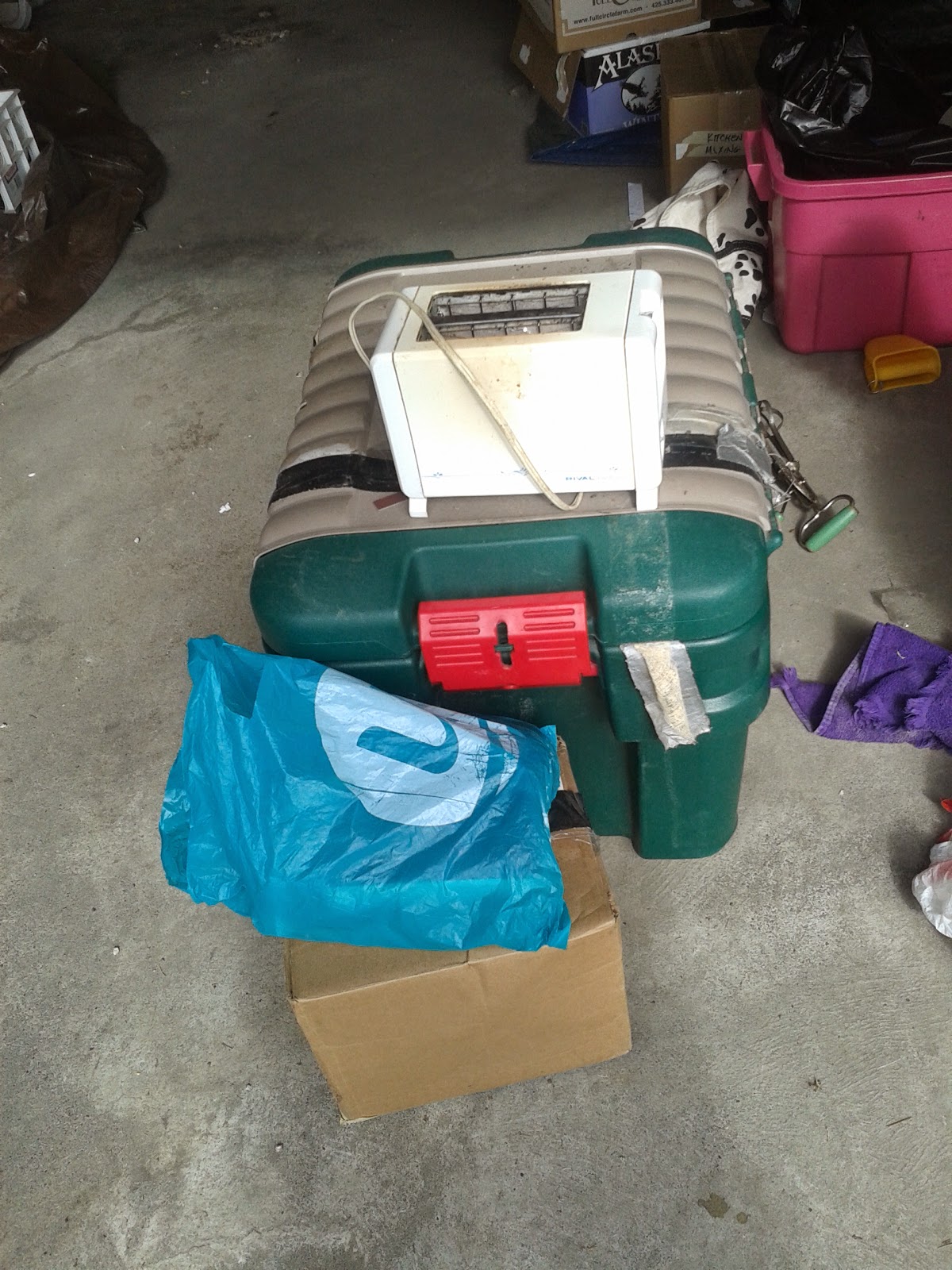 Phase One of the stuff shuffle was my review the assumptions that forced the pack in the first place.  At the time,  I’d kept the bare minimum of the house (no furniture) in place in case I wanted to return, hoping that I would return from world travels with a someone else. I kept the trappings of the home together, hoping to rekindle. Remember July 2011?

Phase Two was to consider what I might "need" next.  The mindset with which I sifted belongings went to an image not yet formed, a the tiny house somewhere here or there, hither and yon.   A place of which I have yet to create and is percolating to form a richer and more fuller vision in the future. There were many times I considered a home, especially on the road.

Between 1989 and 1995,  I worked as a seasonal guide year round, spending time at the front desk of ski resorts in Colorado in the winters, tromping around in the tundra in Alaska in the summer and  rowing rivers in the heart of the Chihuahuan desert in West Texas in the spring.

One season,  I’d suggested to the boyfriend at the time that we build a tent platform for our megamid home, a pyramid shaped single pole tent on the hill behind the boathouse.  It was a windy, dusty shelter.  Our neighbors were fellow boatman whose primary goal of each evening was stumbling up to the tent after a night of beer drinking. I came off from the river one day after a particularly blustery day and found my inflatable mattress impaled on the downwind barbed wire fence.
After hours and hours on the river, I would often ascend the hill and fall asleep fantasizing of clean cotton sheets on a forgiving bed, a gentle breeze through gauze curtains and a single daffodil on the bedside table.   Throughout many of those journeys, I longed for a familiar turn of the key in the lock and the reassurance of my own physical space.  Years later and when I could, I bought my house.

Returning to my house in Spenard made me realize how much I’d changed since leaving it three years ago.  I was perturbed but resigned with the untended state of the gardens, astounded my how much I’d left behind and pleased with the tenant’s paint job.  I was ready to let go and thus the gleaning began.

Over the days, I reviewed and evaluated objects.  Was it small and irreplaceable enough to keep?  Would someone else like it and appreciate it more? How many boxes would be a burden to my friend’s allotted storage space? I remembered some things that were considered very precious at a time, but were lost over the years and for which I have always regretted: a diligently crocheted bag bartered for knitting goods , my grandmother’s bracelet, a miraculously artful beaded winter hat I knitted.  What is my attachment to these things?  What would I have to gain by letting them go?

In that questioning of those relationships between our belongings and ourselves, there was a reassurance about identity and self.    We are created with a soul, which is then influenced by our relationships, our experiences and the places where we choose to spend time.  I had to say goodbye to the house forever, permanently end the 16 years of investment that entailed both significant and minor self-taught home improvement projects, a dedicated cultivation of  microbial soil and the conscientious creation of community.
Late one afternoon, enmeshed, overwhelmed and surrounded by the piles of stuff, I stopped bending over and stretched to look at the sky.  That moment, a huge Alaskan dragonfly alighted on the roof of the storage closet in the backyard.  Emotions welled up and I breathed deeply to say hello.

Years ago, while I was working in the bowels of downtown Boston as a street outreach worker in 1986, I took solace in a weekend volunteer caretaker job on the Saco River in Maine.  Each morning and evening, thousands of dragonflies would hover to feed on the prolific mosquitoes.  Since then, I have surrounded myself with their image.  Seeing this totem alight was a reassurance that I was on the right path.  I was completely and totally enmeshed in this moment of transition, of letting go, surrounded by the objects of my history and those tools and objects that defined my self for so long. There is a vast unknown, strengthened by character and deed, of possibility and of fortune, destiny and luck.

Now I knew--  only when we let something go can we allow something else to fill its place.